Anthony started at TTAD in November 2018 and he brings over twenty years of programming experience to the District.  At a young age Anthony took to swimming and swam competitively until he graduated high school.

After high school Anthony went on to attend Portland State University where he earned his degree with a double major in Community Health Education and Health Fitness Education.

Anthony has worked for several different organizations including the Boy's & Girls Club, City of Tigard, and the MJCC. He has worked in recreation and aquatics for most of his entire career which he started as a lifeguard at age fifteen. He has also taught hundreds of swim lessons, sports classes, and was a high school swim coach for four years and a club coach for the MJCC Stingrays for three years.

On his free time Anthony likes to spend time with his wife and son. They enjoy hiking, the coast, Bend Oregon and watching their son play sports.

Catherine
Tualatin PC1
​
Catherine will be continuing her long time roll as a swim teacher while adding a new title to her name. Her position as program coordinator 1 has officially begun.

Teacher Catherine has been enjoying swim lessons for many years and takes pride in former students who are now her staff members.  She is an avid baker and a true sports fan. Please ask her your favorite football trivia question! 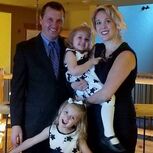 After moving to the City of Tigard in 1980 John became a pool rat, riding his bicycle down the street to the Tigard Swim Center. He became a lifeguard for the pool in 1991 and a swim instructor in 1998, helping teach grade school classes though the school district.  He quickly became supervisor, started working full time and helped to develop the evening lesson programs for both pools in 2003. John has worked for the district since its formation in 2010.

Joining the local club team in the fall of 1980, the Tigard Aquatic Club (now TTSC), John has been involved in the sport of swimming ever since. As a club swimmer, he was one of TAC's first Junior National Qualifiers. In 1993 he swam to an Oregon state title in the 200 individual medley in high school and was selected an All-American in two events. He continued his success in swimming competing in the NCAA division I for Iowa State University. While there, he broke 4 school records, earned All-American honors and qualified to compete at the 1996 Olympic Trials.

He began coaching his senior year of college as a student assistant with his team and worked with both varsity teams. Working under Trip Hedrick, in a competitive swim lesson program called Swim America designed to promote the sport of competitive swimming. He continued coaching after graduating helping coach his alma mater Tigard High School. He became the head water polo coach of Tigard in 2001 and the head swim coach in 2008.

Away from the pool John is a proud father of two little girls, an avid star wars fan and repository of useless information.
​Meet our new Program Coordinators 2’s (PC2) for TTAD ​
​
​Daniel
​Tualatin Afternoon/Evening PC2
More info to come!

Kevin has always loved being in the water, whether playing or competing, starting swimming lessons when he was two years old. When he was nine, he started competitive swimming with the Tigard Swim Club which would eventually become the Tigard-Tualatin Swim Club. He stayed with the swim club through his freshman year, when he began competing for Tualatin High School. After his freshman year he decided to concentrate on high school swimming and also joined the Tualatin High School water polo team, and he competed on both teams through his senior year.

Kevin spent two years at Portland Community College before transferring to Southern Oregon University. After a year and a half at SOU, he realized that he wanted a more meaningful, active career than finance, and transferred to Pioneer Pacific College where he earned his associates degree in medical assisting. It was during that time that he started working at the Tigard and Tualatin pools as a lifeguard and instructor. Kevin enjoyed teaching so much that even after finishing his degree, he chose to continue his career at TTAD.

Kevin loves working in the community where he grew up, and is looking forward to helping develop programs that make swimming fun and safe for children and their families.